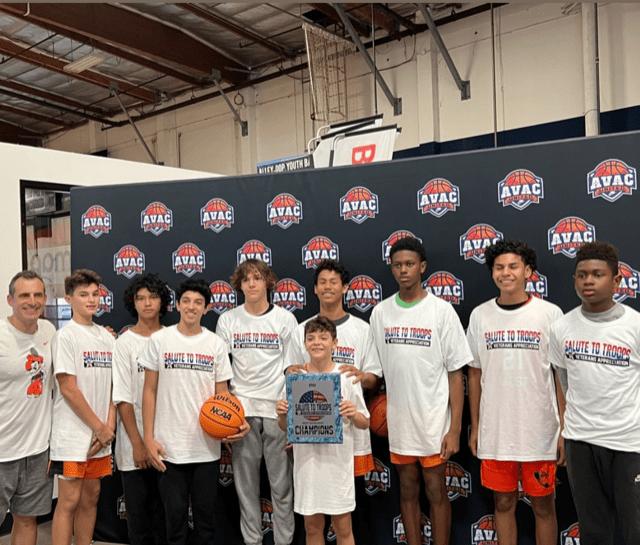 Branch West has been a consistent program that has been solid in almost every tournament they play in. Last year they had a solid run in our Prep Hoops Next event out in Orange County and you can see the development of their players and how well structured they are. They have a few players that can play up as well as players that hold their own. They have already started the year off winning some solid tournaments and posting some great numbers across the board.

Smooth lefty lead guard that can change speeds to release pressure from a full-court trap or when someone picks him up full-court. To add to his game with the ball in his hands he is a lefty that can get loose and is slightly shifty enough to create separation on his moves and even to create separation with his shots. If you leave him open out in the perimeter he does have that usual lefty smooth looking jumper. He keeps his head up when he is bringing the ball up the floor and he will stop and pop or walk into a three especially if a team is playing a 2-3 zone. Although he is left handed he has a nice right hand and he can carve through the lane and finish. If you double team him he will fins the open man.

Drive and kick specialist that will light you up in the corner with that shot. You have to know where he is at all times because he is deadly out there. He might be small but the kid can shoot. When the defense runs him off the three he puts the ball on the floor and knows how to keep his vision up and dish the ball well. Not a ball ball handler when he has the ball in his hands as he uses that crossover and can break a few players off the dribble.

Great size as a wing that can probably play all 5 positions right now. Although he does have some height he has guard skills. In the pick and roll he makes the right decision and although he can get to the rim he makes the right read and he gets the ball to the right players. This is a kid that is unselfish as he finds open player all game long. Ryan is a stat stuffer and he is just an energy giver out on the floor.