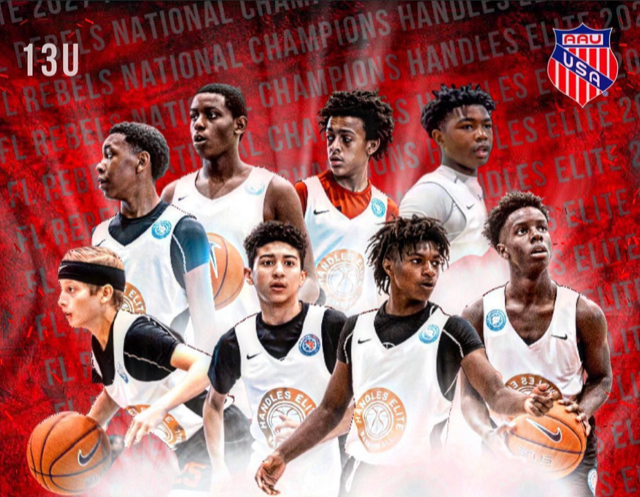 The Florida Rebels aka. Handles Elite is a program to really watch as they might be a bit under the radar but they have some dogs on the squad and it would not be a surprise if they added a few more big names as Florida is rich with talent, especially in the Miami area where they seem to produce a lot of multi-sport athletes. Last season they had a big time year capturing some prestigious wins including a big time championship.

With a mixture of guards that can take over with their ability to create out in the perimeter as well as making their way into the paint they pose some issues for defenses. They also have some bigs that can hod their own against the taller teams as this team across the board is strong and will not get pushed around.

Skilled guard that can hurt you at all three-levels and what makes him a real tough guard is that he does not go into tunnel vision as he passes the ball at a high level. He hits the open man off of screens and broken plays. Cayden will light you up from deep and he will also break you down off the dribble using that elite handle and change of pace. Can go right or left with quickness.

The movement off the ball is really fun to watch and the way he is out there hunting for shots is nice. Really has a feel for that jumper as he can hit the mid-range jumpers as well as the long three’s as well. He has a nice quick first step on a rip and go. Contact is welcomed as he will not avoid going inside through people. His breakdown ability as he sets up the defender is nice.

Strong PF that can use bth hands around the rim as he displays great touch on finishes. He also has soft hands. One of the most under-appreciated parts of his game is that he goes hard on the glass and on the o-boards he keeps the ball high so he can finish and keep the ball away from the littles. He is going to be a force and a matchup problem as he can move and he runs the floor rim to rim very well.

Miguel is a walking bucket as he will provide some shooting from the outside but don’t be fooled he can put the ball on the ground. Really like that stop and pop game he has. With the dudes he has running with him that can get in the lane and draw two he is going to be lights out when he gets that kick out.