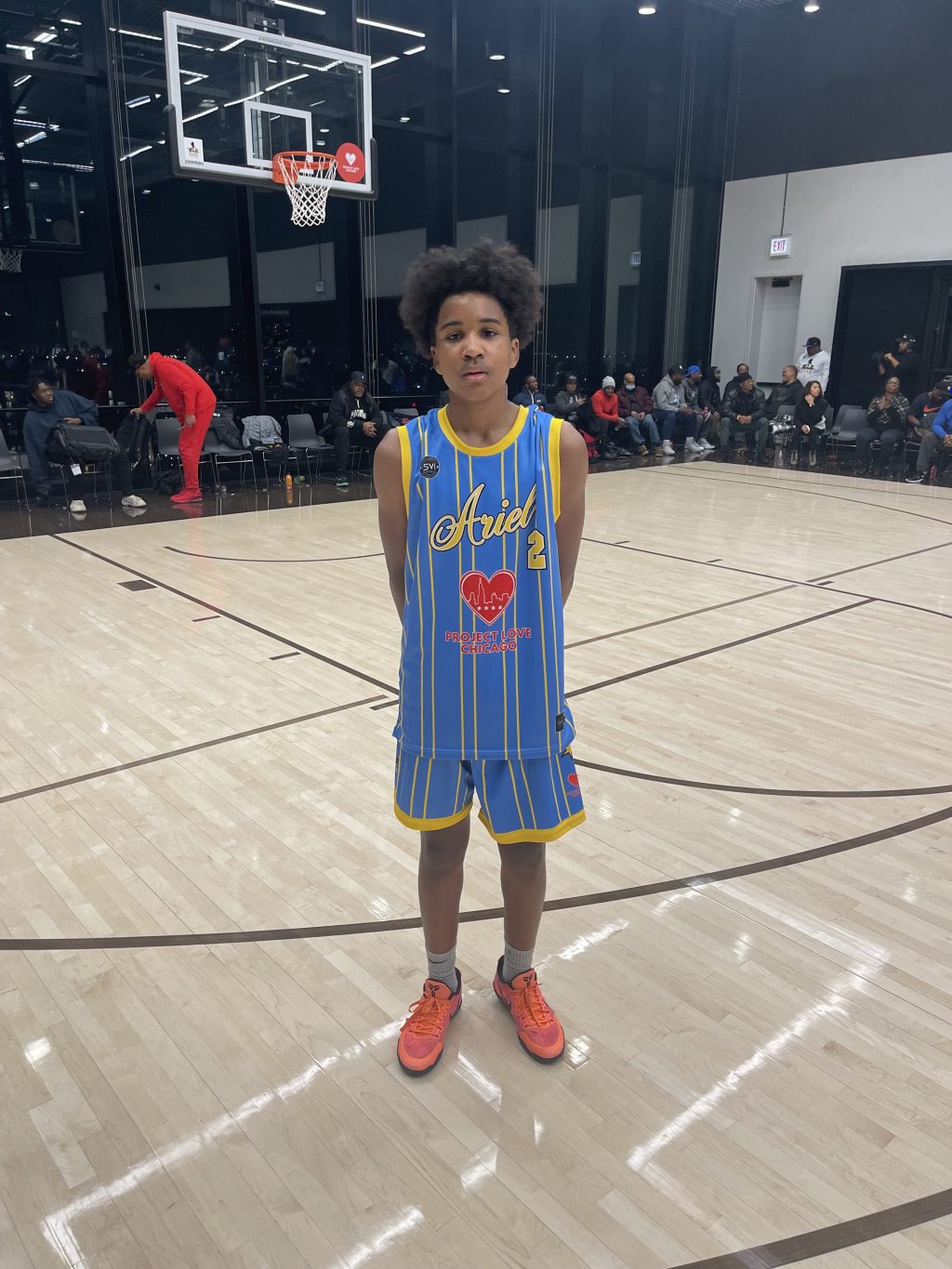 Project LOVE put on an incredible event over the Martin Luther King holiday weekend.  Some of the top young Illinois prospects were in attendance.  Some that we know, along with some new faces that are now on our radar!  Project…

Devin Cleveland 5’10” Point Guard Ariel 2027:  Fans came out to see a show and Devin gave the fans what they were looking for in this one.  He was sensational in this one.  With his team having a sizeable deficit at half time, Devin came out in the second half and completely took over.  He made shots, he defended, he consistently kept pressure on the defense.  Quite possibly had the best individual performance of the day.  Recently announced that he will be attending Kenwood Academy for high school.  Looking forward to continuing tracking this young man at the next level.

Roosevelt Thomas 6’0 Guard Chi Prep 2028:  TOUGH!! It’s rare when a young player takes over by imposing his will on the game, but that is what the highly regarded 7th Grade prospect did in the game.  His willingness to guard the other team’s best player completely changed the tide of the ball game.  Offensively the strongly built Roosevelt showed that he was a complete guard who could handle the ball and make sound decisions down the stretch.  When he needed to score, he did, when he needed to facilitate, he did that as well.  I walked away thoroughly impressed!

Kayleb Young 6’7″ Forward/Center Chi Prep 2027:  Big fella was an absolute FORCE!!  He scored in the paint, rebounded outside of his area, and what impressed me the most, ran the floor for transition finishes like a guard.  As he continues to work on his conditioning and skill set, the sky is the limit for Kayleb.  A name you will be hearing more about sooner rather than later.

Howard Williams 6’5” Wing Chi Prep 2027:  Howard is oozing with talent and potential.  The smooth operator picked and chose his spots well in this one.  A couple of his teammates had it going in this one, and Howard showed great maturity in allowing his teammates to continue flowing.  He still did things in the game from a skill standpoint that you just don’t see from an 8th Grader.  He is what we thought he was…a top prospect in grade school.

Alvin Robinson III 6’1″ Forward 2028 (Skinner West):  Early on in the process I have seen very few kids with the projectability of Alvin.  The 6’1” 7th grader’s full game was on full display in this one.  He defended, handled the ball, made shots, created for himself and others.  There were times when he handled the ball the length of floor and threw some passes that had with crowd in an uproar.  He has an advanced feel and skill set for his age and has the potential to be really special down the line.

Jaivyn Winchester 5’5 Point Guard 2028 (Kenwood):   This kid was flat out SPECIAL in the game I watched!  He has a high skill set.  He is a leader who shoots it well and has an extremely high IQ.  I have evaluated Jaivyn several times, and each time I come away with the same assessment:  The bigger the game, the bigger he plays.  He had 2 points at halftime and finished with 18 points and the win.  He completely took over the game.

Caden Crudup 6’2″ Wing 2027 (FXW):  Caden was very impressive in the first game of the event.  He showed to be extremely versatile in the first game.  He made shots, handled the ball, facilitated for his teammates and rebounded the ball well.   He finished the game with a game high 16 points and 6 rebounds.

Matt Greene Jr. 5’11” Guard 2027 (Lindblom):  There are some kids who are productive now, but you see even more promise down the line.  Buy stock now in this young man!  A guard with great length who can play either guard spot, and has a really good feel for the game.  Someone worth tracking.  He has the frame that appears that he will grow taller in high school.

Kendall Meyers 6’0″ Forward 2027 (Kenwood):  Kendall was one of the more versatile players from the shootout.  Has great size and skill set.  What I really like is that he didn’t need the ball to be effective.  Time and time again he won matchups on the offensive glass to generate offense for himself.  Projects out as wing with really good size down the line.

Jamier Montgomery 5’9” Point Guard 2027 (Skinner West):  Jamier did a lot of the things that we like that landed him as one of the featured prospects in the previous 2027 article.  Jamier’s shot was not falling as well as we had seen in some other games, but that didn’t stop him from living in the paint with crafty drives and finishes.  His toughness and competitive spirit are never lacking and he almost willed his team to a victory in this one.  He seems like he’s been consistently growing and if this trend continues….WATCH OUT!

Jayden King 5’10” Guard Beasley 2027:  Jayden was lights out!!! My first time seeing this young man in live action, and I came away impressed.  In a competitive matchup against Devin Cleveland and Ariel, Jayden had them on the ropes connecting on 5 three pointers.  A sleeper in this class that I expect to hear a lot about as he transitions into high school.

Darrius Hawkins 5’6″ Point Guard Prairie Hills 2028:  A floor general with a flare to his game that is very advanced for his grade.  Showed extreme poise while running his team.  Has the ability to breakdown defenders off the dribble and make the right play.  He is a highly touted player in his class and its easy to see why.  I have seen him several times and he is a winner.  What I love about him is his passion for the game.  He plays both ends of the floor and does whatever is necessary to secure a victory for his team.